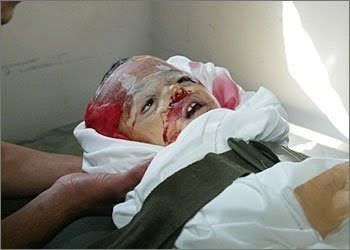 Tzipi Livni’s election campaign began in earnest tonight when Israeli ground forces moved into the Gaza ghetto.  They brought tanks to fight civilians and their stated aim is to destroy the Hamas terror infrastructure.

The peace-loving Merkava tanks will take on the evil terror-loving  Palestinians and force them to be reasonable.

Accept the prison we made for you.  Live in the filth we created for you.  Forget the homes we stole from you and be sensible.  Stop firing home-made rockets at our desert and we’ll stop bombing you with our supersonic jets.

What could be more reasonable?

And in another immensely reasonable act, the Israelis made sure that

all foreigners were removed from Gaza before their armed forces entered the ghetto.  This ensures that only reasonable and balanced reports from Israeli intelligence reach the world’s media as the operation begins.

Therefore, I expect that only terrorists and Hamas operatives will be killed.  Hundreds and hundreds of terrorists

and Hamas operatives.  Perhaps thousands — who knows?  After all, Gaza is full of terrorists.

In coming days, watch out for all those terrorist children being  slaughtered, and all those Hamas-sympathising babies.  Watch out for reports of evil, terror-loving Palestinians, so bloodthirsty that they’ve lived in the Gaza compound since 1967, or 1948 if you prefer the view of an Israeli commenter

here,  after being thrown off their farms to permit the creation of the Israeli state, shooting the occasional firework at land occupied by those who ejected them.

These people must be crushed.  They must be forced to compromise  by the F16s and the Merkavas.  They must be forced to see reason and accept that they will never be permitted to return to their homes because those farmhouses are now the property of the Israeli families who moved into them when their original owners were kicked out by force of arms.  But not by terror, obviously, because terror is something other people do — the sort of people who disagree with Israel.

Why can’t these terrorists see sense?

Here’s a scene from Hell.  Do not look at this video if you are easily shocked.